Worth Reading – Primal: A Quest for the Lost Soul of Christianity 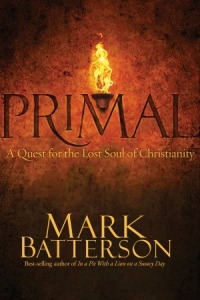 Earlier this year I discovered Mark Batterson’s first book, In a Pit With A Lion On A Snowy Day, published in 2006. As a Church Planter in South Louisiana, I was drawn to Mark’s story of starting a church in a difficult place and the truths in the book have been hard to shake. It has stayed close to my desk all year. In June of this year, my wife Heather and I took an anniversary trip to Washington D.C. and had the privilege of visiting National Community Church and having coffee at Ebenezer’s Coffeehouse. Along with the coffee I was able to purchase Mark’s second book, Wild Goose Chase: Reclaim the Adventure of Pursuing God, and was equally inspired and challenged. I was excited to hear about the third book, Primal: A Quest for the Lost Soul or Christianity, and was honored to receive an advanced copy to read and review.

Batterson’s books are easy to read because he weave’s great one liners with science, history, and Bible application. Primal is no different. As Batterson takes you through the Greatest Commandment, “Love God with all your heart, soul, mind, and strength,” you learn about Ancient Rome, brain function and psychology, optometry, history of medicine, astronomy, and more. I have put down all of Batterson’s books with a much longer reading list than when I started.The book was born out of a trip beneath a church in Rome to the catacombs believed to be where early Christians worshiped in secret. Batterson’s personal challenge and call to us is to strip away the complexity of Christianity and bring back the kind of primal faith celebrated by the earliest New Testament Christians. Intriguing to imagine what that faith looked like. I believe this book does a great job diagnosing it as it calls us back to the four elements of Jesus’ Great Commandment – a heart of compassion, a soul full of wonder, a mind filled with curiosity, and strength considered to be primal energy.

Here are a few of my favorite quotes:

Primal would make a great book to kick off the new year with. It’s available as of yesterday. Get it hot off the press and go Primal with your faith in 2010.

Also, keep up with Mark Batterson every day on his blog Evotional or by following him on Twitter and Facebook.

Posted on December 24, 2009, in Books worth reading. Bookmark the permalink. Leave a comment.