When normal isn’t working, doing something weird may be necessary. Today, our church is defying normal in several ways.

Instead of doing the normal Sunday morning routine – dressing up, singing, telling everybody we’re fine, etc. – we’ll be out serving neighbors who have normal’s that are not working for them. We call it Faith in Action Sunday.

Like a 97 year old Madisonville resident. Normal for her has meant since Hurricane Isaac she’s lived with a gutted house, no doors, no insulation, and no help or resources to get these things fixed.

Like a family of four with disabilities in Madisonville, who’s normal has become holes in the floor and a lot of unsafe conditions in their home.

Like several elderly widows on fixed incomes around Madisonville. Normal means having no man around to take care of little things, so they become big things. And now they’re facing fines from local government until they are repaired.

Like inmates and their families at our local jail. Normal is wondering about what happens when they get out, will family forgive them, does God care, does anyone care.

So, let’s be weird. Let’s create some new normals. For these individuals and for how our community thinks about Christians. That’s what the Gospel is all about isn’t it? I think when Jesus (who people identified as weird) announced, “Repent for the kingdom of heaven is near” Matthew 4:17, He was saying, “There’s a new normal coming to earth.” When He prayed, “Your kingdom come, Your will be done on earth as it is in heaven” Matthew 6:10, He had a new normal in mind. When he taught, healed, had compassion on the crowds (Matthew 9:35-36) He was displaying what the new normal should look like for every Christian. And He ask us to pray for more weird people, “Ask the Lord of the harvest to send out workers into his harvest field” Matthew 9:38.

And let’s face it, normal Christianity is not working for many in our world. And many times, Biblical Christianity seems weird to us, because we’ve created a normal that depends upon our disobedience. Because to obey would be weird. 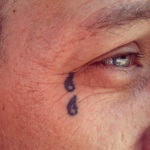 A local inmate says the tears represent the pain his kids feel.

How does your community need you to be weird? Who in your community has a normal that’s unacceptable? Have you allowed normal to be about what other people think instead of what God says and people need? What would people in the community say if you asked them what the normal member of your church looked like?

Posted on April 21, 2013, in Bridge Church, Faith In Action and tagged FaithInAction. Bookmark the permalink. 2 Comments.